Of the many hot issues surrounding the Cyprus problem, the demographic question is one of the biggest. Who actually lives in northern Cyprus and what influence they have over the elections is a topic of much debate. This is because it goes to the core of questions about identity, not only for Greek Cypriots but Turkish Cypriots too. The first wave of people who came from Turkey, commonly referred to as ‘settlers’, came mainly from Anatolia. They tended to have different cultural norms and religious attitudes to indigenous Turkish Cypriots, let alone Greek Cypriots. Another wave brought students, construction workers and other workers who, as Mete Hatay, who has studied this issue for years explains, do not take root. “They come and go,” he says. So how many ‘settlers’ are there? What influence do they have in elections? And who counts as a settler anyway?

One of the obstacles to having a rational debate about the subject is that the Republic of Cyprus, for fear of giving legitimacy to the breakaway ‘Turkish Republic of Northern Cyprus’ (TRNC), does not sanction international verification of the census.

The unfortunate by-product of this is that if you cite figures from the 2011 census, someone will come back at you and say that it is all bogus. However, with a bit of cross-checking, we can test if the 2011 figures, or some of the other claims, are true.

Let’s start with the wildest claim, sometimes made by Turkish Cypriots too, that there are 600,000 settlers in northern Cyprus.

This is an extremely high number given that the total resident population in the southern part of the island, according to the 2011 census, was just 840,407.

If this is the case, you should be able to see physical evidence. But if you have ever driven around the north, apart from about four main roads in Nicosia and one road leading into Kyrenia, you will have been left with an abiding feeling of emptiness.

Of course, many Greek Cypriots do not feel comfortable crossing over. But there are other ways to cross-check the figures.

Look closely and you can see that the population is concentrated, in this order, in Nicosia (both sides), Limassol and Larnaca. There is a bit of light around Kyrenia. But Morphou and the Karpas peninsula are deep black. So unless everyone lives by candlelight, there cannot be 600,000 ‘settlers’ in the north.

When it comes to political influence, it is also important to distinguish between those who have the right to vote and those who do not. Even though polls to date suggest that there is no obvious distinction between the preferences of the ‘settler’ vote and the ‘indigenous’ vote, there is nevertheless a perception that people of Turkish origin will vote differently from those of Cypriot origin.

As the table below shows, in 2011, the resident population was reported at 286,257 (excluding the Turkish army). Of this total, ‘TRNC’ citizens amounted to 190,494. How many of these ‘TRNC’ citizens are of Turkish origin? We can make some inferences by looking at what other identity documents they hold.

Looking at people over the age of 19 produces similar results.

On the basis of the 2011 census, therefore, the ‘settler vote’ in 2011 was around 20% of all voters, while the indigenous Turkish Cypriot vote was almost 72% of all voters. In other words, Turkish Cypriots still represent the vast majority of voters and ‘TRNC’ citizens. This also has an impact on the number of people would would gain united Cyprus citizenship in the event of the settlement of the Cyprus problem. In 2011 there were only 38,000 ‘TRNC citizens’ of Turkish origin in northern Cyprus including children. This probably explains why, ahead of the referendum in 2004, the Turkish Cypriot authorities reportedly had such difficulty finding a list of 40,000 people who would be eligible for united Cyprus citizenship. 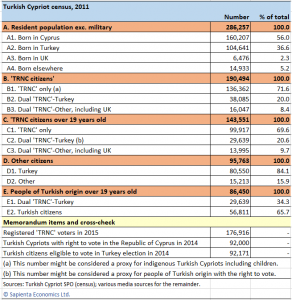 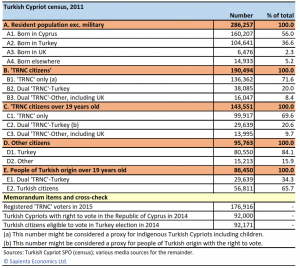 Cross-checking against Republic of Cyprus

Now, if you do not trust the census of an unrecognised entity, then you can cross-check against Republic of Cyprus figures.

According to Republic of Cyprus Ministry of Interior reports at the time, around 92,000 Turkish Cypriots were eligible to vote in the 2014 European Parliament elections in the south. These voters will all have been adults.

For people of Turkish origin, we can compare figures on the number of people in northern Cyprus eligible to vote in the national elections in Turkey. This was reported as 92,171 people in 2014.

In sum, what might be termed the indigenous Turkish Cypriot population is around 136,000 people (B1), or 47.6% of the total resident population.

But the important thing to remember as far as the politics is concerned is that Turkish Cypriots are a much larger proportion of the voting public, at around 70%.